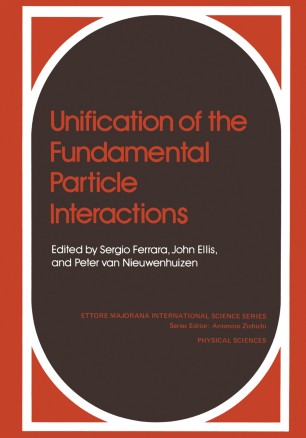 Unification of the Fundamental Particle Interactions

This volume constitutes the Proceedings of a Europhysics Study Conference held in Erice, Sicily from March 17 to 24, 1980. The objective of the meeting was to bring together practitioners of two different approaches to the unification of the fundamental par­ ticle interactions: supersymmetry and supergravity on the one hand, and grand unified gauge theories on the other hand. The hope was that exposure to each others' ideas and problems would at least aid mutual comprehension, and might start people thinking how to develop a synthesis of the two approaches which could avoid their individual shortcomings. It is not clear to us how successful the conference was in achieving these objectives. On the one hand many important ad­ vances in supersymmetric theories were reported which were primarily of a technical nature, while some interesting attempts to probe the phenomenological consequences of supersymmetry and supergravity were also presented. On the other hand there was considerable in­ terest in phenomenological aspects of grand unified theories such as proton decay, neutrino masses and oscillations, and links with cosmology. There was also some work on model-building but rela­ tively few purely technical advances. A few speakers tried to build bridges between the formalism of supersymmetry or supergravity and the phenomenologically successful gauge theories of elementary par­ ticle interactions.