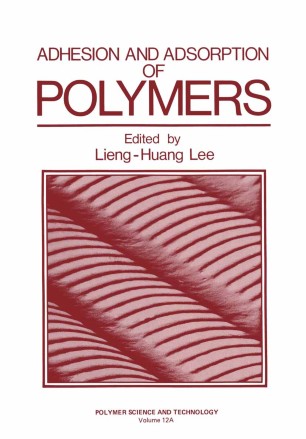 Adhesion and Adsorption of Polymers

Honolulu is a most beautiful place, suitable for all occa­ sions. Its choice as the meeting site for the first Joint Chemical Congress between the American Chemical Society and the Chemical Society of Japan was praised by scientists from both sides. During this Congress, the International Conference on Adhesion and Adsorption of Polymers was held at the Hyatt Regency Hotel between April 2 and 5, 1979. We had speakers from ten nations presenting over forty papers related to the subject matter. It was a memorable event. Unlike our two previous adhesion symposia held in 1971 and 1975, this was the first time in the same conference that we discussed both adhesion and adsorption of polymers simultaneously. These two important phenomena are not only inter-related, but also equally important in adhesive technology as well as biochemical processes. The papers presented to this Conference deal with these two phenomena from both fundamental and practical viewpoints. Furthermore, with the advance of new surface analytical techniques, the actual, microscopic happenings at the interfaces can be pin­ pointed. Thus, characterization of interface became one of the major focuses of this Conference. As a result, a broad coverage of the subject matter includes statistical thermodynamics, surface physics, surface analysis, fracture mechanics, viscoelasticity, failure analysis, surface modification, adsorption kinetics, bio­ polymer adsorption, etc. Thanks to the diligence of our contri­ butors, we are now able to publish the final papers in these two volumes.