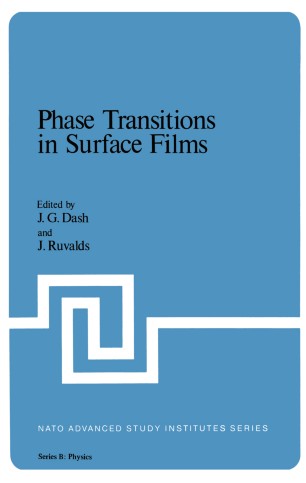 The Advanced Study Institute on Phase Transitions in Surface Films was held at the Ettore Majorana Centre for Scientific Cul­ ture in Erice, Sicily, during June 11 to June 25, 1979. This Institute was the second course of the International School of Low Temperature Physics which was established at the Centre in 1977, with the guidance and inspiration of T. Regge and A. Zichichi. The 1979 course selected a topic on one of the most rapidly advancing fields of condensed matter physics in the late 70's. The program of topics and speakers was developed with the advice of the Organizing Committee, composed of J. Friedel, N. D. Mermin, R. E. Peierls, T. Regge and J. Wheatley. These two weeks were memorable for the range and depth of the lectures and seminars, and the sustained high interest of the students and faculty through a damanding schedule of over 5 hours a day of formal sessions. A large fraction of the leading researchers in the field were there. It would have been impossible to gather such a large group five years earlier, for the field itself is hardly 10 years old. Although the foundations of the thermodynamics of surface films were laid down by Gibbs about 100 years ago, and experiments on oil/water monolayers were carried out by Pockels and Rayleigh at about the same time, the beginnings of the modern field were much more recent.