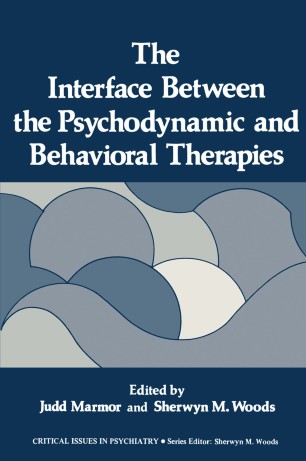 The Interface Between the Psychodynamic and Behavioral Therapies

Part of the Critical Issues in Psychiatry book series

It is sobering to reflect that it has been nearly fifty years since Thomas French's article on the "Interrelations between Psychoanalysis and the Experimental Work of Pavlov," representing the first psychoanalyst to bridge the gap between the theories of conditioning, was published. In hjs paper French clearly delineated the manner and directions in which these two points of view might enrich each other. Regrettably, his open­ ness to new ideas has not been characteristic of most "schools" of psychiatry thought, which have tended instead to develop an unfortu­ nate degree of insularity. This has occurred despite the obvious reality that the bio-social-psychological nature of man is such that no one theory or discipline is likely, in the foreseeable future, to explain, much less predict, all of the complexities of human behavior. All too often disputing theoreticians, like the fabled blind men describing the elephant, assume that the whole is just a gigantic magnification of the parts with which they are in contact. When treatment strategies are extrapolated from such narrow views, more often than not they fail to achieve the parsimony of effort, the breadth of application, and the maximum of efficiency that one would hope for. In our opinion, it is impossible adequately to conceptualize person­ ality development, symptom formation, or responses to psychotherapy, without taking into consideration theories of conflict as well as those of learning.