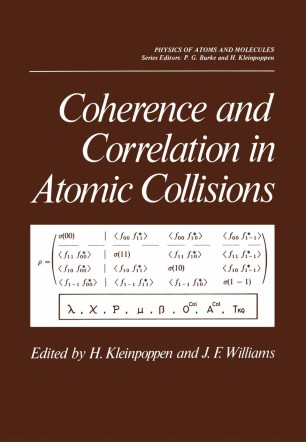 Coherence and Correlation in Atomic Collisions

H. KLEINPOPPEN AND J. F. WILLIAMS It has only very recently become possible to study angular correlations and coherence effects in different areas of atomic collision processes: These investigations have provided us with an analysis of experimental data in terms of scattering amplitudes and their phases, of target parameters such as orientation, alignment, and state multipoles, and also of coherence parameters (e. g. , the degree of coherence of excita­ tion). In this way the analysis of electron-photon, ion-photon, atom-photon, or electron-ion coincidences from electron-atom, ion-atom, or atom-atom collisional excitation has led to a breakthrough such that the above quantities represent most crucial and sensitive tests for theories of atomic collision processes. Similarly, the powerful (e, 2e) experiments (electron-electron coincidences from impact ionization of atoms) have attracted much attention where improved experimental studies and detailed theoretical description provide a wealth of information on either the col­ lisional ionization process or the atomic structure of the target atom. Interference effects, many-electron correlations, and energy and angular momen­ tum exchange between electrons in a Coulomb field playa decisive role in the under­ standing of postcollision interactions. New results on coherence effects and orienta­ tion and alignment in collisional processes of ions with surfaces and crystal lattices show links to relevant interference phenomena in atomic collisions. In small-angle elastic electron-atom scattering the effect of angular coherence can be studied in a crossed beam experiment.