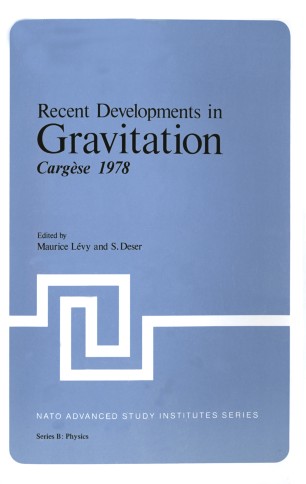 The theory of General Relativity, after its invention by Albert Einstein, remained for many years a monument of mathemati­ cal speculation, striking in its ambition and its formal beauty, but quite separated from the main stream of modern Physics, which had centered, after the early twenties, on quantum mechanics and its applications. In the last ten or fifteen years, however, the situation has changed radically. First, a great deal of significant exper~en­ tal data became available. Then important contributions were made to the incorporation of general relativity into the framework of quantum theory. Finally, in the last three years, exciting devel­ opments took place which have placed general relativity, and all the concepts behind it, at the center of our understanding of par­ ticle physics and quantum field theory. Firstly, this is due to the fact that general relativity is really the "original non-abe­ lian gauge theory," and that our description of quantum field in­ teractions makes extensive use of the concept of gauge invariance. Secondly, the ideas of supersymmetry have enabled theoreticians to combine gravity with other elementary particle interactions, and to construct what is perhaps the first approach to a more finite quantum theory of gravitation, which is known as super­ gravity.