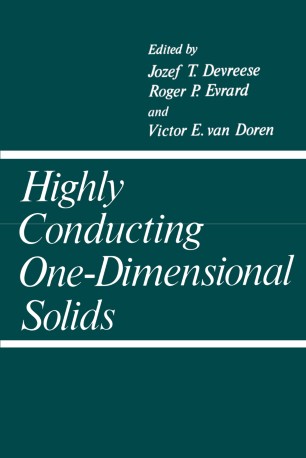 Although the problem of a metal in one dimension has long been known to solid-state physicists, it was not until the synthesis of real one-dimensional or quasi-one-dimensional systems that this subject began to attract considerable attention. This has been due in part to the search for high­ temperature superconductivity and the possibility of reaching this goal with quasi-one-dimensional substances. A period of intense activity began in 1973 with the report of a measurement of an apparently divergent conduc­ tivity peak in TfF-TCNQ. Since then a great deal has been learned about quasi-one-dimensional conductors. The emphasis now has shifted from trying to find materials of very high conductivity to the many interesting problems of physics and chemistry involved. But many questions remain open and are still under active investigation. This book gives a review of the experimental as well as theoretical progress made in this field over the last years. All the chapters have been written by scientists who have established themselves as experts in theoreti­ cal and experimental solid-state physics. The book is intended to be of use both to students and researchers entering the field as well as to more advanced physicists. The wealth of ideas and information it contains ought to be useful to anyone interested in quasi-one-dimensional systems, organic solids, or the search for novel conduction and superconduction mechanisms. The editors are very grateful to the authors for their collaboration in this book.