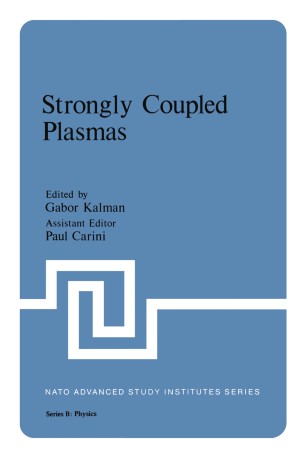 The Advanced Study Institute on Strongly Coupled Plasmas was held on the campus of the Universite d'Orleans, Orleans-la-Source, France, from July 6th through July 23rd, 1977. 15 invited lecturers and 50 other participants attended the Institute. The present Volume contains the texts of most of the lectures and of some of the numerous seminars presented at the Institute. The topic of strongly coupled coulomb-systems has been an area of vigorous activities over the last few years. Such systems occur in a great variety of physical situations: stellar and planetary interiors, solid and liquid metals, semiconductors, laser compressed plasmas and gas discharges are some of the most important examples. All these systems have the common feature that for one or more of their constituent charged particle liquids the potential energy to kinetic energy ratio is not small, and therefore the application of the traditional plasma perturbation techniques is not feasible. Many ingenious theoretical schemes have been worked out in order to attack both the related equilibrium and nonequilibrium problems, and also various methods have been borrowed from areas where problems not dissimilar to the ones arising in coulomb-systems had already been tackled. At the same time, computer simulations have led to a probably unparalleled accumulation of data on the behavior of an ensemble of classical charged particles. For the first time, the Institute assembled workers from various disciplines who had been involved with diverse aspects of the strongly coupled plasma problem.