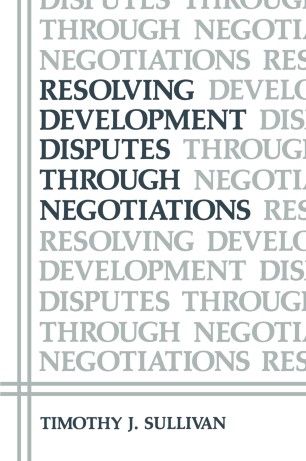 In the last decade, disputes between developers and local commu­ nities over proposed construction projects have led to increasing litiga­ tion. Environmental legislation, in particular, has greatly enhanced the rights and powers of organized groups that desire to participate in local development decisions. These powers have allowed citizen groups to block undesired and socially unacceptable projects, such as highways through urban areas and sprawling suburban developments. At the same time, these powers have produced a collective inability to construct many needed projects that produce adverse local impacts. Prisons, airports, hos­ pitals, waste treatment plants, and energy facilities all face years of liti­ gation before a final decision. At times, prolonged litigation has pro­ duced especially high costs to all participants. Despite these new powers, citizen action has often been limited to participation in public hearings or adjudicatory proceedings. Typically, this occurs so late in the decision process that citizen input has very little affect in shaping a project's design. Those who dislike some element of a project often have little choice other than to oppose the entire project through litigation.