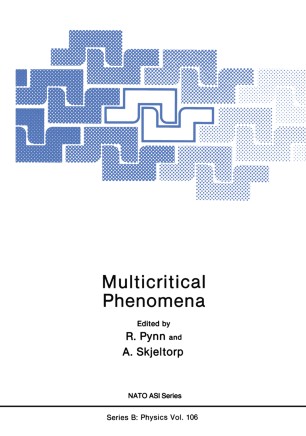 This book comprises the Proceedings of a NATO Advanced Study Institute on Mu1ticritica1 Phenomena held in Geilo, Norway, between 10-21 April 1983. This school was the seventh to be held in Gei10, on various aspects of phase transitions. In spite of its apparently restrictive title the school was planned as a forum for the discus­ sion of phase transitions and instabilities in systems, with competing interactions and competing order parameters. Thus, in addition to the canonical multicritical points, subjects were diverse as critical phenomena in random magnetic systems and routes to chaos were discussed. The subject matter of the school is naturally divided into a series of categories which to some extent, reflect the historical development of interest in competing phenomena at phase transitions. Multicritical points in equilibrium systems, defined phenomenolo­ gically as points of sudden change of behaviour on an otherwise smooth phase boundary, were the first topics of the school. The theo­ retical consensus which has emerged during the past decade, largely as a result of calculations with the renormalisation group, was reviewed in some detail. The results presented, however, apply only to pure systems (in which dirt and other manifestations of reality are irrelevant) in that small realm close to the phase transition knoYln as "asymtopia.