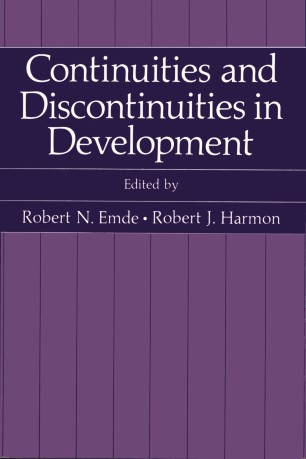 Part of the Topics in Developmental Psychobiology book series (TDP)

"Continuities and Discontinuities in Development" was the theme for the Second Biennial DPRG Retreat, a three-day meeting held at Estes Park, Colorado, in June 1982. The meeting was sponsored by the Devel­ opmental Psychobiology Research Group (DPRG) of the Department of Psychiatry at the University of Colorado School of Medicine. The DPRG is a group of individuals conducting research in many areas of develop­ ment who meet on a regular basis to present and discuss their work and receive feedback and encouragement. In 1974, this group was awarded an endowment fund by the Grant Foundation, the aims of which were to facilitate the research of young investigators, to encourage new re­ search, and to provide seed money for collaborative ventures. Much of the work reported in this volume and in the earlier volume from the First DPRG Retreat is the result of that support. In addition to the work of the members of the DPRG, a select group of guests was invited to participate in the meeting and contribute to this volume. The chapters by William Greenough, Jerome Kagan, and Michael Rutter result from the participation of these scholars at the retreat. We would like to acknowledge the support of a number of indi­ viduals who have been instrumental in supporting the DPRG as a whole, as well as those who contributed directly to the Second Biennial Retreat and to the volume.