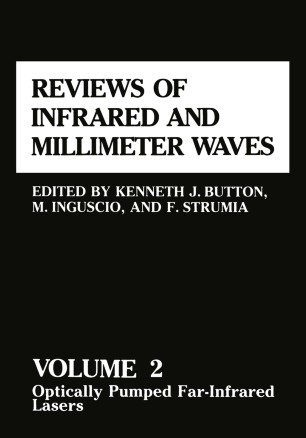 Reviews of Infrared and Millimeter Waves

This book represents a compendium of the twenty most useful far-infrared (or submillimeter) lasers. In the case of each laser described here, we have been fortunate to have the author who is the pioneer and acknowledged authority describe the principles of operation and to prepare the list of emission lines. Until these lasers were developed during the past decade, the submillimeter range of the spectrum has been almost barren due to lack of sources of radiation. The lasers described here remain the only practical, powerful source of radiation between the wavelengths of one millimeter and ten micrometers. Many hundreds of emission lines have been listed here, some providing hundreds of kilowatts of peak power in pulsed operation, others providing many tens of milliwatts of continuous power. The hundreds of wavelengths of the emission lines are so closely spaced in the wavelength range between one millimeter and one-tenth millimeter that this source of radiation can be considered to be step-tunable. Of course, labora­ tory scientists still depend upon the black body source (mercury vapor lamp) and the Fourier transform spectrometer to provide con­ tinuous spectra, but for this we must deal with true energy starva­ tion at the sub-microwatt level. This critical review can be expected to serve as a handbook for decades in the future because it contains descriptions of fundamen­ tal principles and listings of fundamental physical data.