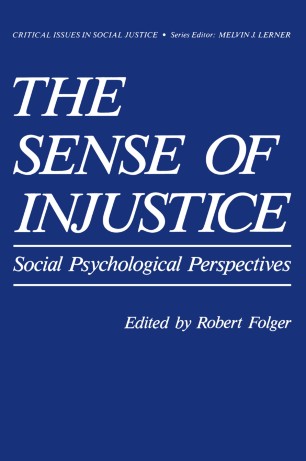 The Sense of Injustice

The importance of justice cannot be overstated. As one author has put it, "A better understanding of how justice concerns develop and function in people's lives should enable us to plan more effectively for institutional and other social change to deal with the problems that confront humankind" (S. C. Lerner, 1981, p. 466). The volume in which that statement appeared-an earlier one in this same series-was devoted to exploring the impact that dwindling resources and an increasing rate of change have had upon people's concern for justice. In contrast, the present volume places greater emphasis on the word under­ standing, as it was used in the context of the preceding quotation, than upon effective planning, social change, and ways of dealing with human problems. Nothing in that statement of purpose is meant to belittle the urgency of translat­ ing understanding into action, because the social significance of justice concerns is a major factor that has prompted the authors of the chapters in this book to do research in the area. Rather, this volume receives its emphasis from Kurt Lewin's famous dictum there is nothing so practical as a good theory. The need for good theory is ongoing, and these pages are dedicated to a search for new pathways toward better theory.