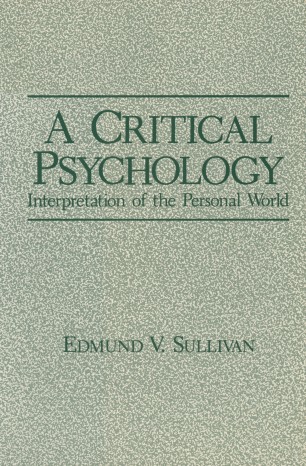 If the reader will excuse a brief anecdote from my own intellectual history, I would like to use it as an introduction to this book. In 1957, I was a sophomore at an undergraduate liberal arts college major­ ing in medieval history. This was the year that we were receiving our first introduction to courses in philosophy, and I took to this study with a passion. In pursuing philosophy, I discovered the area called "philosophical psychology," which was a Thomistic category of inquiry. For me, "philosophical psychology" meant a more intimate study of the soul (psyche), and I immediately concluded that psychology as a discipline must be about this pursuit. This philosophical interest led me to enroll in my first introductory psychology course. Our text for this course was the first edition of Ernest Hilgaard's Introduction to Psychology. My reasons for entering this course were anticipated in the introductory chapter of Hilgaard's book, where the discipline and its boundaries were discussed, and this introduction was to disabuse me of my original intention for enrolling in the course. I was to learn that, in the 20th century, people who called themselves psychologists were no longer interested in perennial philosophical questions about the human psyche or person. In fact, these philosophical questions were considered to be obscurantist and passe. Psychology was now the "scientific" study of human behavior. This definition of psychology by Hilgaard was by no means idiosyncratic to this introductory textbook.