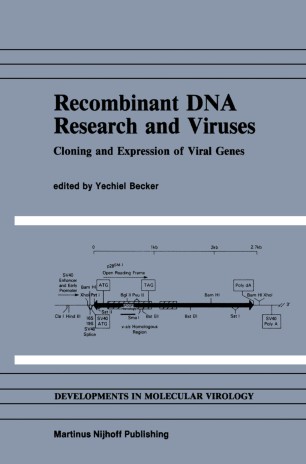 Cloning and Expression of Viral Genes

The development of recombinant DNA technology has made a marked impact on molecular virology. The cleavage of viral DNA genomes with restriction enzymes and the cloning of such DNA fragments in bacterial p1asmids has led to the amplification of selected viral DNA fragments for sequencing and gene expression. RNA virus genomes which can be transcribed to their cDNA form were also cloned in bacterial p1asmids, facilitating the study of RNA virus genes. With the elucidation in recent years of the promoter sequence of various viral genes and the expression of these genes in bacteria or yeast, the understanding of many viral gene functions has made great progress. Cloning and expression of viral genes in mammalian cells was made possible by the construction of shuttle plasmid vectors which carry the origins of DNA replication from bacteria and/or mammalian viruses. The expression of viral genes in bacteria, yeast and eukaryotic cells gives reason to hope that it will be possible to produce viral antigens in large quantities for use as human or animal vaccines. The present volume attempts to capture for the reader some of the high­ lights of recombinant DNA research in the field of animal and plant viruses.