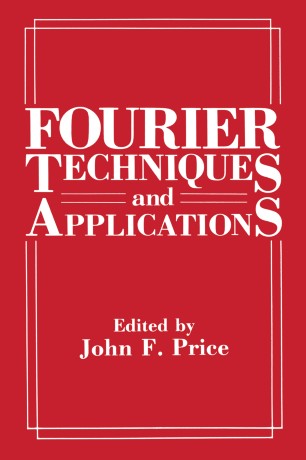 The first systematic methods of Fourier analysis date from the early eighteenth century with the work of Joseph Fourier on the problem of the flow of heat. (A brief history is contained in the first paper.) Given the initial tempera­ ture at all points of a region, the problem was to determine the changes in the temperature distribution over time. Understanding and predicting these changes was important in such areas as the handling of metals and the determination of geological and atmospheric temperatures. Briefly, Fourier noticed that the solution of the heat diffusion problem was simple if the initial temperature dis­ tribution was sinusoidal. He then asserted that any distri­ bution can be decomposed into a sum of sinusoids, these being the harmonics of the original function. This meant that the general solution could now be obtained by summing the solu­ tions of the component sinusoidal problems. This remarkable ability of the series of sinusoids to describe all "reasonable" functions, the sine qua non of Fourier analysis and synthesis, has led to the routine use of the methods originating with Fourier in a great diversity of areas - astrophysics, computing, economics, electrical engineering, geophysics, information theory, medical engineering, optics, petroleum and mineral exploration, quan­ tum physics and spectroscopy, to name a few.