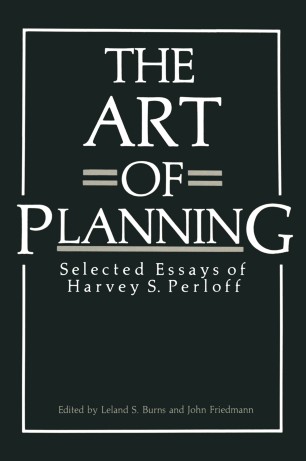 The Art of Planning

The work of Harvey S. Perloff stands as a landmark in the evolution of Anglo­ American planning doctrine. It is impossible to fully capture the essence of the published work in a paragraph, page, or even an entire essay. Yet its highpoints can be identified. His work was innovative, reformist, comprehensive, and ori­ ented toward the future. In emphasizing the greater importance of people com­ pared to things, Perloff repeatedly prodded planners to be concerned with human needs and values. He was critical of the past. But inasmuch as he de­ voted more effort to envisioning what could lie ahead than in recalling the past, his work was markedly optimistic. He once admitted in writing to his "built-in weakness for expecting rational, socially oriented solutions ultimately to win out, no matter what the objective situation seems to be. " To some the expecta­ tion may be seen as naive; to others, as a faith in the wisdom of humankind to take the best course. However received, Perloff's optimism served as a powerful stimulant to keep moving ahead for the best that would come of it. Institutions and the ways they should be shaped and reshaped were of central concern, for institutions (though he rarely used the term) were the in­ struments through which "knowledge was translated into action.