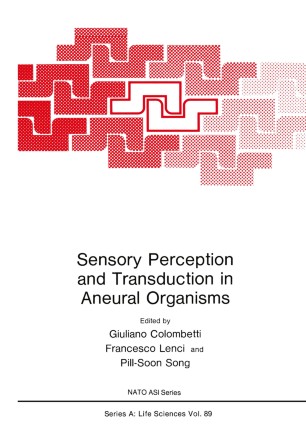 This book is based on the lectures given at the NATO Advanced Study Institute on "Sensory Perception and Transduction in Aneural Organisms" held in Volterra (Pisa. Italy) from the third to the fourteenth of September. 1984. The Advanced Study Institute was planned as a high level course dealing with several aspects and problems of sensory perception and transduction of diverse environmental stimuli in aneural organisms. Scientists from different fields and cultural backgrounds were present at the meeting. both as lecturers and as students. The lectures and the discussions that followed represented a well integrated interdisci­ plinary approach to the questions considered. At the end of the Advanced Study Institute course. it was quite clear that. notwith­ standing the apparent heterogeneity of the topics dealt with. unifying concepts and ideas already existed, among the most important being the role of membranes and their physicochemical properties. All this should be reflected in the content of this book. We gratefully acknowledge the financial sponsorship of the Scientific Affairs Division of NATO (Brussels), that made both the Advanced Study Institute on "Sensory Perception and Transduction in Aneural Organisms" and this book possible. Finally. we are also indebted to Ms. Pat Parham Morgan who expertly retyped all the chapters of the book and Ms. Leslie Schmidt of Plenum Publishing Co. provided us valuable advice and suggestions on the preparation of this book. G. Colombetti F. Lenci P. S.