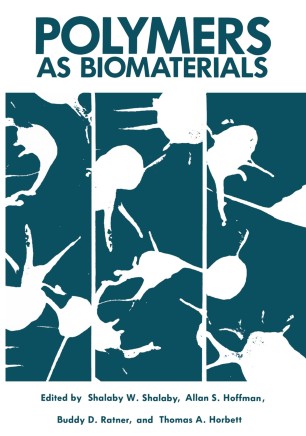 Nearly 4000 years ago, the Egyptians used linen, a natural polymeric material, for suturing wounds. About 600 B.C., the Indians used other forms of natural polymers such as cotton, horse hair, and leather in repairing wounds. Wound closure procedures using silk sutures, based mostly on polypeptides, are likely to have been practiced during the second century. Surgical application of natural polymers continued to represent the major use of polymers until the twentieth century. Not too long after the development of several major synthetic polymers, their use in biomedical applications has attracted the attention of many re­ searchers and clinicians. Over the past few years, interest in the biomedical applications of polymers has grown considerably. This has been the result of the inevitable collaborative efforts of in­ novative materials scientists, engineers and clinicians. The es­ tablishment of the Society for Biomaterials, in our opinion, cata­ lyzed the growing interest in the use of polymers for biomedical application. In a major effort to bring team players even closer, a five-day symposium on "Polymers as Biomaterials" was held in Seattle, Washing­ ton, in March, 1983 as part of the national meeting of the American Chemical Society. The symposium was designed to provide a forum for communicating technical and clinical data to colleagues with a broad spectrum of interest in the biomedical applications of polymers.