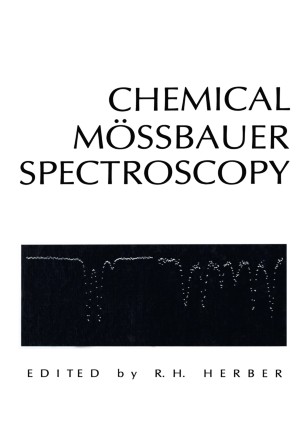 The past twenty five years - roughly the period from 1960 to 1985 - have been by all measures among the most exciting and challenging times of our science. The increasing sensitivity of chemical instrumentation, the introduction of the routine use of computers for data reduction and of microprocessors for instrumental control, the wide-spread utilization of lasers, and the disappearance of traditional disciplinary boundaries between scientific fields are but a few of the examples one could cite to support the introductory contention. Almost all of these developments have had their impact on the development of Mossbauer Effect Spectroscopy into a technique par excellence for the elucidation of problems in all areas of chemistry and its associated sister sciences. Indeed, because this spectroscopy is based on fundamental phenomena in nuclear physics, is described in terms of the theory of the solid state and structural chemistry, is useful in the understanding of chemical reactivity and biological phenomena, and can serve to supplement information developed by many other experimental techniques, it has provided an unparalleled opportunity for the exchange of ideas among practitioners of a very wide variety of subfields of the physical and biological sciences. The present collection of contributions is the direct result of such an interaction.