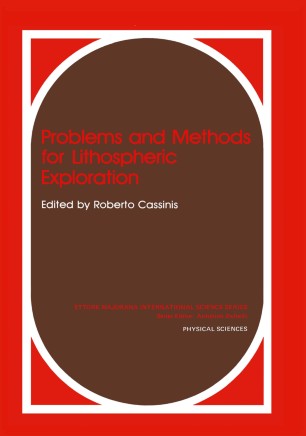 Problems and Methods for Lithospheric Exploration

This volume contains several contributions among those held at the fourth Course of the International School of Applied Geophysics, Erice, March 15-24, 1982. The content has been arranged according to the three main topics covered during the course: the goedynamic models, the contribution of geophysics to their construction and the optimization and constrains of the exploration methods. At the end of the volume, four short notes are published, written by participants to the course and related to the general subject. It is regrettable that not all the lectures and discussions are available for publication in this volume. However, it is hoped that the papers presented here will stimulate further discussions and suggest new topics for future meetings. R.Cassinis v CONTENTS 1 Introductory note R Cassinis Global seismology and the investigation of deep 5 continental structure G Nolet The relation between superficial and deep structure of 23 the Caucasus region and possible geodynamic model V N Sholpo Seismicity and crustal structure in the Italian region: 53 a preliminary zoning R Cassinis 93 Structure seismology I P Kosminskaya Main features of crustal structures in mediterranean 113 collisional zones P Giese Potentia~ and constraints of near vertical reflection 133 seismics in non-sedimentary deep formations K Helbig and J Schmoll Geoelectrical deep explorations by means of direct currents L Alfano 179 Reflection profiling of the continental crust R Phinney Evidence for a strong crust-mantle boundary undulation in the TYrrhenian sea from a refraction seismic 183 survey C B!)ttcher