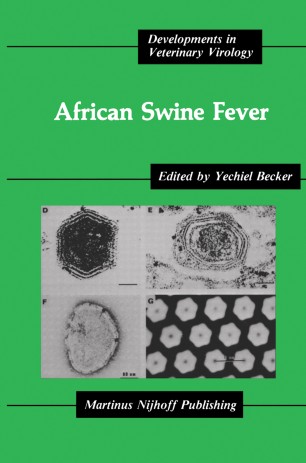 African swine fever (ASF) is caused by a virus that is classified as a member of the Iridovirinae family. The disease in the warthog, the natural host, in Africa was described in 1921 by R. E. Montgomery. The reservoir of the vi rus is inti cks. The i ntroduct i on of domestic pi gs into territory occupied by warthogs i nf ected wi th ASF in the 1960's has endangered the pig industry around the world. The domestic pig is highly sensitive to ASF and develops a devastating disease that kills the pig without giving the immune system a chance to defend the animal against the virus infection. The ability of ASF virus to infect and destroy cells of the reticuloendothelial system leaves a defenseless host that succumbs to an infection which may be described as an acquired immune deficiency di sease of domestic pi gs. Introduction of the virus into Iberia in the 1960's led to a series of ASF epidemics in Spain and Portugal . . and later in France, that caused heavy economic losses. Between 1976 and 1960, ASF virus made its appearance in Malta and Sardinia . . as well as in Brazil, The Dominican Republic . . Haiti, and later in Cuba. In 1985-6 . . ASF appeared in Belgium and The Netherlands.