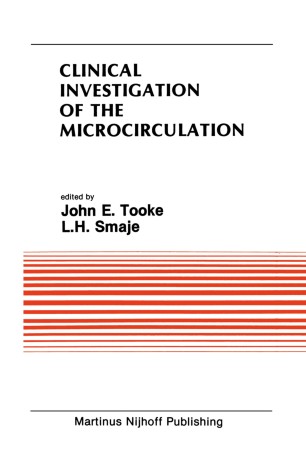 Clinical Investigation of the Microcirculation

Proceedings of the Meeting on Clinical Investigation of the Microcirculation held at London, England September, 1985

In 1628 William Harvey published his discovery of the existence of the microcirculation which he deduced from careful anatomical and physiological study. Thirty-three years later, Malpighi confirmed the presence of capillaries through direct microscopical observation. Subsequent scientific advance has been slow, and in view of the fact that microvascular in the genesis and expression of many pathophysiology may be implicated diseases, our know ledge of human microvascular function is surprisingly limited. This ignorance attests to the difficulty of studying something that is both minute and inaccessible without disturbing the quantity that is being measured. In the last fifteen years, however, direct techniques have been developed for studying human microvascular pressure, flow and permeability. These methods have provided new insights into human microvascular function in health and disease. At the same time there has been a steady growth of new indirect techniques based on a w ide range of physical principles that reflect some or other aspect of microvascular function.