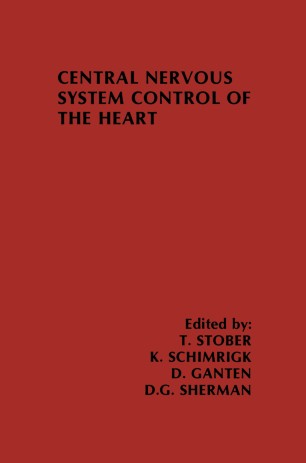 Part of the Topics in the Neurosciences book series (TNSC, volume 4)

The first two "Brain Heart Conferences" in Jerusalem in 1978 and 1983 were based upon the common interests of clinically orientated neurologists and cardiologists in the problems of centr'al autonomic control and autonomic disturbances of the cardiovascular system. The relatively slow scientific progress, at least clinically, in this area may be due to the fact that neither cardiologists nor neurologists felt competent in both topics. Furthermore, it has become increasingly difficult to have an overall view of the basic research and its clinical applications in this field. New research methods, based on a comtination of morphological, biochemical, and physiological techniques, have enabled the functional differentiation of various areas of the brain and subsequently also of the autonomic nervous system. The simple dualistic concept of an antagonistic sympathetic-parasympathetic regulation of the circulatory system is no longer valid. It is clear that numerous neurotransmitters, in particular the neuropeptides, are involved in a highly differentiated subdivision of the autonomic system. One of the aims of the IIIrd International Brain Heart Conference was therefore to supply a synopsis of the latest developments in basic research undertaken in this field by exceptionally competent scientists, to clinically orientated neurologists and cardiologists, and thus to provide new impulses for clinical research.