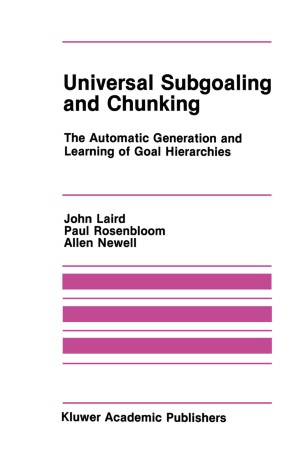 The Automatic Generation and Learning of Goal Hierarchies

Part of the The Kluwer International Series in Engineering and Computer Science book series (SECS, volume 11)

Rarely do research paths diverge and converge as neatly and productively as the paths exemplified by the two efforts contained in this book. The story behind these researches is worth recounting. The story, as far as I'm concerned, starts back in the Fall of1976, when John Laird and Paul Rosenbloom, as new graduate students in computer science at Carnegie-Mellon University, joined the Instructible Production System (IPS) project (Rychener, Forgy, Langley, McDermott, Newell, Ramakrishna, 1977; Rychener & Newell, 1978). In those days, production systems were either small or special or both (Newell, 1973; Shortliffe, 1976). Mike Rychener had just completed his thesis (Rychener, 1976), showing how production systems could effectively and perspicuously program the full array of artificial intelligence (AI) systems, by creating versions of Studellt (done in an earlier study, Rychener 1975), EPAM, GPS, King-Pawn-King endgames, a toy-blocks problem solver, and a natural-language input system that connected to the blocks-world system.