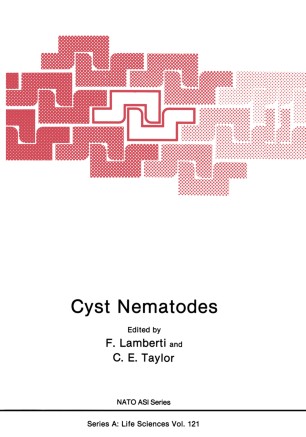 The cyst nematodes are a major group of plant pathogens of economic importance in many countries throughout the world. Considerable yield losses have been attributed to cyst nematodes attacking potatoes, sugar beet, soybean and cereals. Because of the protective cyst that is formed, which encloses the eggs, they pose special problems in their control and also in preventing their distribution in soil from infested areas. There has been much research on many aspects of the biology of cyst nematodes and the large number of publications are testimony to their importance as crop pests and of the interest of nematologists in the group. Nevertheless, they continue to pose problems because of the complexity of their phylogeny and taxonomy and there is still much to be investigated on their biology, particularly with those aspects which relate to improving the effectiveness of control. In many respects the biology of the various cyst nematode species is similar, although with variations due to different interactions with hosts and geographical location. Thus, research on any one species has general applicability and this is particularly so with regard to evaluation of control measures, or to the methodology of soil sampling for the assessment of populations prior to growing crops.