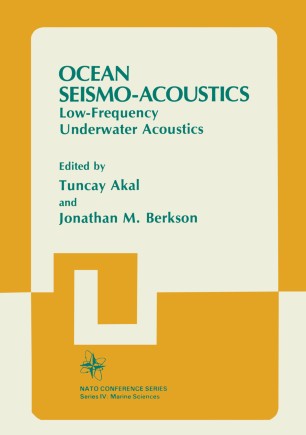 Seafloor investigation has long been a feature of not only seismology but also of acoustics. Indeed it was acoustics that produced depth sounders, giving us the first capability of producing both global and local maps of the seafloor. Subsequently, better instrumentation and techniques led to a clearer, more quantitative picture of the seabed itself, which stimulated new hypotheses such as seafloor spreading through the availability of more reliable data on sediment thickness over ocean basins and other bottom features. Geologists and geophysicists have used both acoustic and seismic methods to study the seabed by considering the propagation of signals arising from both natural seismic events and man-made impulsive sources. Although significant advances have been made in instrumentation, such as long towed geophysical arrays, ai r guns and ocean bot tom seismometers, the pic ture of the seafloor is still far from complete. Underwater acoustics concerns itself today with the phenomena of propagation and noise at frequencies and ranges that require an understanding of acoustic interaction at both of its boundaries, the sea surface and seafloor, over depths ranging from tens to thousands of meters. Much of the earlier higher frequency (>1 kHz) work included the characterization of the seafloor in regimes of reflection coefficients which were empirically derived from surveys. The results of these studies met with only limited success, confined as they were to those areas where survey data existed and lacking a physical understanding of the processes of reflection and scattering.