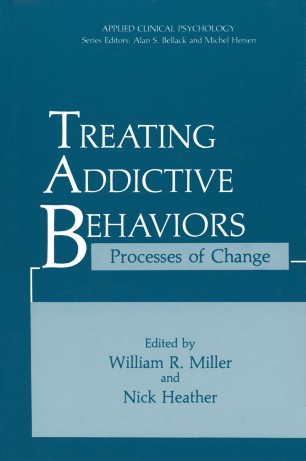 About a decade ago, psychologists began exploring the commonalities among alcohol and drug abuse, smoking, and obesity. The term sub­ stance abuse evolved into the current concept of addictive behaviors, which recognizes similarities with other behaviors that do not involve consummatory responses (e. g. , pathological gambling, compulsions, sexual deviations). Professional societies and journals now have been founded in both Britain and the United States with the purpose of focus­ ing on research and treatment in the area of addictive behaviors. As the field has evolved, new models have emerged to address the questions and puzzles that face professionals. This volume examines some of these current issues and, in particular, explores common pro­ cesses of change that seem to cut across the addictive behaviors. The chapters are based on papers presented at the Third International Con­ ference on Treatment of Addictive Behaviors, which was held at North Berwick, Scotland, in August of 1984. The conference was organized around an integrative model of stages and processes of change that has been useful in organizing new knowledge about how to intervene with addictive behaviors. This model is set forth by its authors, Jim Prochaska and Carlo DiClemente, in Chapter 1. In Chapter 2, Fred Kanfer ex­ pounds his own model of self-regulation, which overlaps nicely with the Prochaska-DiClemente framework and provides a behavioral-theoretical context.