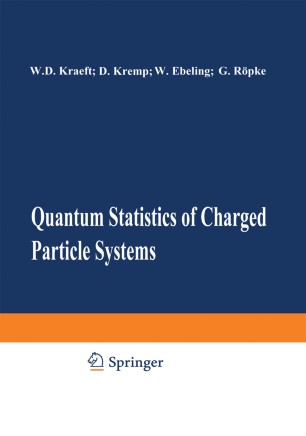 The year 1985 represents a special anniversary for people dealing with Ooulomb systems. 200 years ago, in 1785, Oharles Auguste de Ooulomb (1736-1806) found "Ooulomb's law" for the interaction force between charged particles. The authors want to dedicate this book to the honour of the great pioneer of electrophysics. Recent statistical mechanics is mainly restricted to systems of neutral particles. Except for a few monographs and survey articles (see, e. g., IOHIMARU, 1973, 1982; KUDRIN, 1974; KLIMONTOVIOH, 1975; EBELING, KRAEFT and KREMP, 1976, 1979; KALMAN and CARINI, 1978; BAUS and HANSEN, 1980; GILL, 1981, VELO and WIGHT­ MAN, 1981; MATSUBARA, 1982) the extended material on charged particle systems, which is now available thanks to the efforts of many workers in statistical mechanics, is widely dispersed in many original articles. It is the aim of this monograph to represent at least some part of the known results on charged particle systems from a unified point of view. Here the method of Green's functions turns out to be a powerful method especially to overcome the difficulties connected with the statistical physics of charged particle systems; some of them are . mentioned in the introduction. Here we can point, e.g., to the appearance of bound states in a medium and their role as new entities.