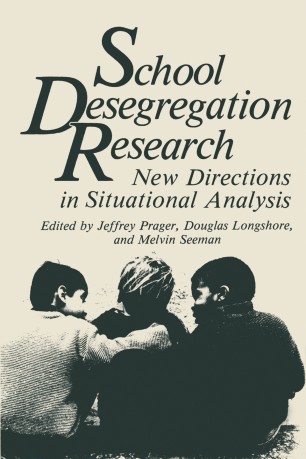 The desegregation situation is the keynote theme of the following chapters. I Each of them touches on a different dimension of the situation: the historical, the temporal, the spatial. But the reader, perusing the essays with the situation in mind, should remember that the desegregation situation should not be inter­ preted literally. Authorities and adults certainly, school-age children probably, are influenced by their awareness of a sequence of past and future situations. Some may even operate with William James's (1890, p. 608) notion of "the specious present" that "has melted in our grasp, fled ere we could touch it, gone in the instant of becoming," thus reducing the potency of the present situation. Others may be dancing to a slower tempo of change, thus becoming more responsive to the present situation. Whatever the perceived tempo, many must share the view that the future may reverse the direction of the past. Some may see that new future direction as unswerving, unending, or long-lasting; others may see it as short-lived. And it is through attention to the phenomenological description of desegregation that these issues can be explored; a theme that is considered in several of the following chapters.