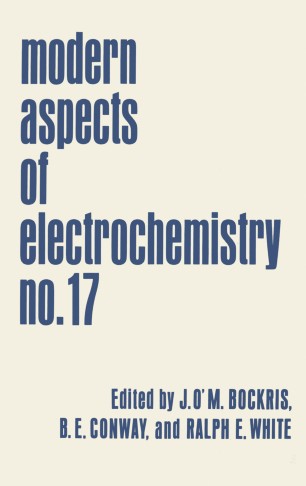 It gives us pleasure in writing the Preface to this volume, in which we tried to bring together a number of stimulating and interesting people discussing physical electrochemistry. The first chapter, by Ashok Vijh, gives a remarkable account of electrochemistry as looked at from a physicist's point of view. Among the revelations of the chapter is that in a recent survey of leading areas in Science, two out of fifteen areas chosen were electrochemical and these two were the only chemical subjects chosen. In Mikhail Vorotyntsev's chapter, one finds a very modern study of the double layer, but tenuously connected with the simpler studies made in the safe harbor of mercury. In the pioneering chapter by Pons et al., one is looking at a cutting edge of electrochemistry at this time-the use of IR spectros­ copy in modes which allow the first practical determinations of the spectra of adsorbed species at the interface-an area pioneered by Pons himself. In Chapter 4, we have reached photoelectrochemistry once more, but now Tributsch speaks about what has rapidly become the major area of that topic, photoelectrocatalysis. Close to this chapter, and indeed intellectually connected with it, is that by Schmickler and Schultze about electron transfer reac­ tions at oxide-covered metal electrodes in which theories which are still relatively dubious for metal-solution surfaces are applied to complex systems involving oxides.