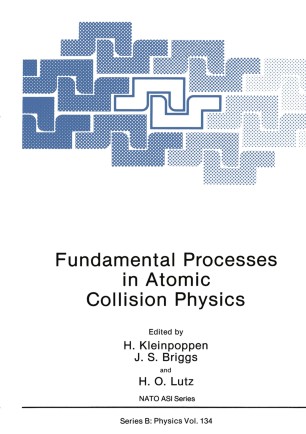 The Proceedings of the Advanced study Institute on Fundamental Processes in Atomic Collision Physics (Santa Flavia, Italy, September 10-21, 1984) are dedicated to the memory of Sir Harrie r-1assey, whose scientific achievements and life are reviewed herein by Sir David Bates. At the first School on the above topic (Maratea, September 1983, Volume 103 in this series), Harrie Massey presented the introductory lectures, summarized the entire lecture program, and presented an outlook on future developments in atomic collision physics. In an after-dinner speech, Massey recalled personal reminiscences and historical events with regard to atomic collision physics, to which he had contributed by initiating pioneering work and by stimulating and surveying this branch of physics over a period of almost six decades. Participants in the Maratea School will always remember Harrie Massey as a charming and wonderful person who was most pleased to discuss with everyone--students, postdoctorals, and senior scientists--any topic in atomic collision physics. Harrie Massey was a member of the Scientific Advisory Committee of the 1984 Santa Flavia School. Before his death he expressed his interest in attending this second School devoted to the presentation of recent developments and highlights in atomic collision physics. It is the desire of all authors to honor Harrie Massey with their contributions in these Proceedings.