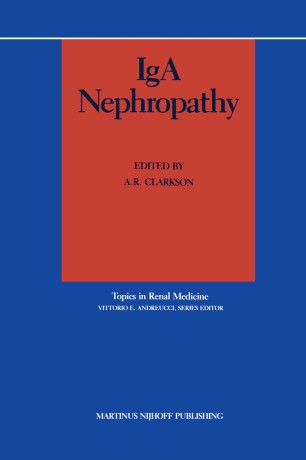 IgA nephropathy has, in the course of two decades, become one of the most important renal diseases. Not only is it the most common form of glo­ merulonephritis seen in many countries, its increasing recognition by renal biopsy in this time has allowed sufficient study to conclude that it is also one of the most frequent causes of end-stage renal failure. The clinical features are diverse, and only in a minority do recurrent macroscopic hematuric episodes associated with an upper respiratory tract infection allow a confident clinical diagnosis. All clinicians, from community practitioners to general and specialist internists and surgeons, should be aware of its manifestations in patients of all ages. Its relationship with Henoch-Sch6nlein purpura is especially interesting. The discovery of IgA nephropathy has caused an explosion of interest and research. The disease itself (if indeed it can be regarded as a single entity rather than a syndrome) has been studied extensively by many groups and a synopsis is presented by several of the leaders in this clinical field. Parallel with the increased understanding of the renal disease, there has occurred similar incremental knowledge in such diverse fields as the structure and function of the glomerular mesangium, the biology of mucosal immu­ nity, and the IgA immune response. This book has collected essays on these topics that emphasize their importance in the rclation to the study of IgA nephropathy.