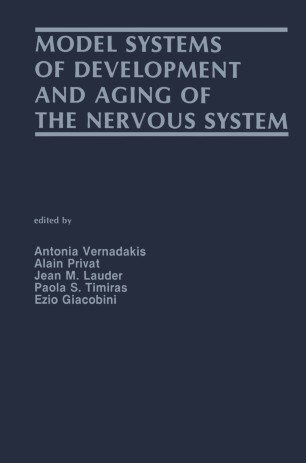 Model Systems of Development and Aging of the Nervous System

The last decade has generated a multitude of studies using in vitro model systems to explore growth and differentiation of the nervous system. Although the findings have been exciting and have revealed unique properties of neural cells, considerable concern continues to be expressed regarding the significance of in vitro findings in terms of their applicability to in vivo biological events. To examine this issue further, a group of scientists pre­ sented and discussed their findings at a conference sponsored by the Institute of Developmental Neuroscience and Aging held in Crete, Greece, 26-29 May 1985. The conference was cosponsored by the University of Crete and was generously supported by the Ministry of Research and Technology of Greece, Tourism Organization of Greece, and also Sandoz and FIDIA. The Directors of the Institute of Developmental Neuroscience and Aging are indebted to these Institutions for their support. For the success of this conference, the Directors owe much to Drs. Eleni Fleischer-Lambropoulos and Yiannis Tsouderos, who spent countless hours in making arrangements so that the participants would have not only a scientific, but also a unique cultural, experience. Several chapters of this book focus on the complex phenomena of neurogenesis and gliogenesis, and the modulation of neuronal differentiation. The concept that neuronal differentiation has both genetic and epigenetic components is documented by elegant studies using both in vitro cultured cells and neurons transplanted in vivo.