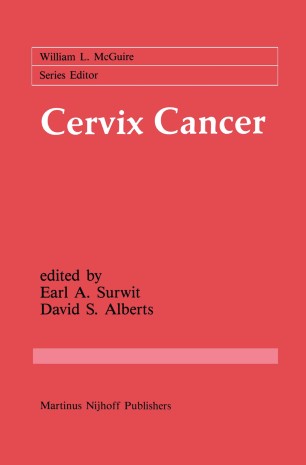 Cytological screening for the identification of intraepithelial neoplasia of the cervix as a precursor lesion for cervical cancer has been well established as an effective means for decreasing the incidence of invasive carcinoma. Despite these screening efforts, carcinoma of the cervix remains one of the more common malignancies in women and it is the leading cause of cancer death in many countries in the western hemisphere. It is estimated that in 1986 there will still be 14,000 new cases of invasive cancer, with 6,800 deaths in the United States alone. Unfortunately, many of these patients present with advanced disease, posing difficult management problems for the clinician responsible for their care. The treatment of early stage invasive carcinoma of the cervix (lesions confined to the cervix and vagina) remains either radical surgery, radical radiation therapy or a combination thereof This approach is extraordinarily effective in the vast majority of patients. However, there remains a subset of patients with early stage disease that are at high risk for recurrence. Dr Kjorstad (Chapter 2) has identified adenocarcinomas and adenosqua­ mous carcinomas as having a particularly poor prognosis. In addition, patients with more than three positive lymph nodes or with involvement of lymph nodes outside of the pelvis have a very poor prognosis. He has iden­ tified the CEA as a potentially predictive marker for these patients with poor prognosis, especially in patients with adenocarcinomas.