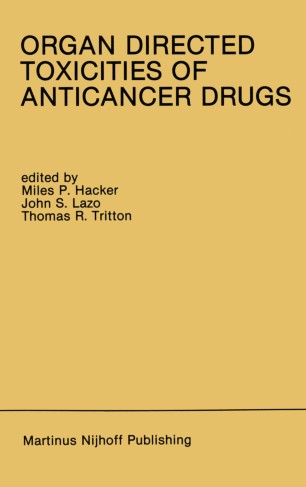 Part of the Developments in Oncology book series (DION, volume 53)

The addition of chemotherapy as an effective means to treat cancer has had a major impact on selected human malignancies. Due to a general inability to dif­ ferentiate between normal and neoplastic cells, little selectivity exists in currently used oncolytic drugs. Consequently, significant toxicity to the patient is expected when systemic cancer chemotherapy is chosen as an appropriate therapeutic in­ tervention. Much of this toxicity, such as damage to the bone marrow, gastroin­ testinal tract, or hair follicles, is predictable based upon the fact that anticancer drugs kill actively dividing cells. These types of toxicities, while serious, are usually manageable and reversible and are, therefore, not often considered to be dose limiting. Unfortunately, several of the most important anticancer drugs also damage tissues in which the growth fraction is relatively small. Such toxicities can not be predicted based on the chemical structure of the drugs, are often not detected in preclinical studies, and are encountered frequently for the first time in clinical studies. Further, unlike most of the proliferative-dependent toxicities, the unpre­ dicted toxicities are usually irreversible or only partially reversible upon cessation of drug administration. Because of this, the unpredicted toxicities are referred to as dose limiting. They represent a significant barrier to the ultimate efficacy of several of our most important anticancer drugs.