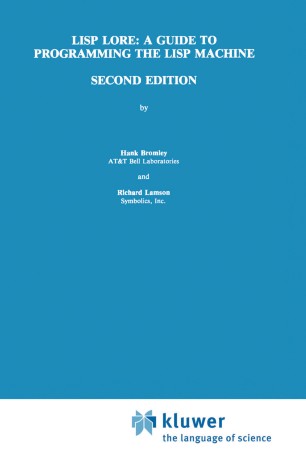 LISP Lore: A Guide to Programming the LISP Machine

This book had its genesis in the following piece of computer mail: From allegra!joan-b Tue Dec 18 89:15:54 1984 To: sola!hjb Subj ect: 1 i spm Hank, I've been talking with Mark Plotnik and Bill Gale about asking you to conduct a basic course on using the lisp machine. Mark, for instance, would really like to cover basics like the flavor system, etc. , so he could start doing his own programming without a lot of trial and error, and Bill and I would be interested in this, too. I'm quite sure that Mark Jones, Bruce, Eric and Van would also be really interested. Would you like to do it? Bill has let me know that if you'd care to set something up, he's free to meet with us anytime this week or next (although I'll only be here on Wed. next week) so we can come up with a plan. What do you think? Joan. xiv Lisp Lore (All the people and computers mentioned above work at AT&T Bell Laboratories, in Murray Hill, New Jersey. ) I agreed, with some trepidation, to try teaching such a course. It wasn't clear how I was going to explain the Lisp Machine environment to a few dozen beginners when at the time I felt I was scarcely able to keep myself afloat. Particularly since many of the "beginners" had PhD's in computer science and a decade or two of programming experience.