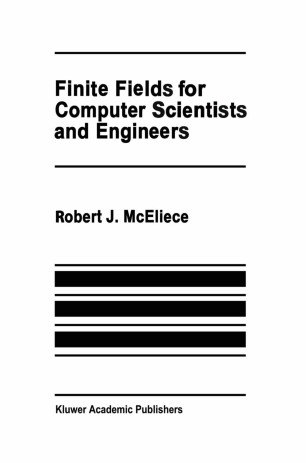 Part of the The Kluwer International Series in Engineering and Computer Science book series (SECS, volume 23)

This book developed from a course on finite fields I gave at the University of Illinois at Urbana-Champaign in the Spring semester of 1979. The course was taught at the request of an exceptional group of graduate students (includ­ ing Anselm Blumer, Fred Garber, Evaggelos Geraniotis, Jim Lehnert, Wayne Stark, and Mark Wallace) who had just taken a course on coding theory from me. The theory of finite fields is the mathematical foundation of algebraic coding theory, but in coding theory courses there is never much time to give more than a "Volkswagen" treatment of them. But my 1979 students wanted a "Cadillac" treatment, and this book differs very little from the course I gave in response. Since 1979 I have used a subset of my course notes (correspond­ ing roughly to Chapters 1-6) as the text for my "Volkswagen" treatment of finite fields whenever I teach coding theory. There is, ironically, no coding theory anywhere in the book! If this book had a longer title it would be "Finite fields, mostly of char­ acteristic 2, for engineering and computer science applications. " It certainly does not pretend to cover the general theory of finite fields in the profound depth that the recent book of Lidl and Neidereitter (see the Bibliography) does.