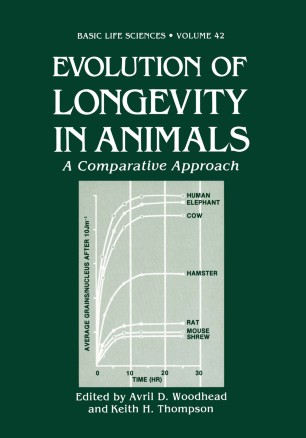 Evolution of Longevity in Animals

The analysis of intra-group correlations between LS and BW at representative intervals yields no consistent support for the hypothesis that lower BW is associated with longer LS. Indeed, among male Wistar rats and C57BL/6J and A/J mice followed since weaning on AL diets, the data suggested that relatively higher BW across the adult LS was generally associated with longer life. Even when the diet was restricted by EOD or RES regimens, this pattern of positive correlations between LS and BW persisted for the C57BL/6J and A/J strains when relative ages were analyzed. However, when BW at absolute ages were correlated with LS, support for the positive relationship between BW and LS was not as forthcoming. When AL groups were assessed beginning at later ages (> 10 months), the pattern of positive correlations was very evident for the Wistar rats--heavier rats tended to liver longer. This pattern was also evident among AL-fed C57BL/6J mice followed since 6 months, but was lost in the 10-month group in this strain. Among A/J mice on AL diets, the pattern became somewhat negative when followed at 6 and 10 months of age. However, among both C57BL/6J and A/J mice placed on EOD diets at 6 and 10 months of age, the pattern clearly tended toward the positive.