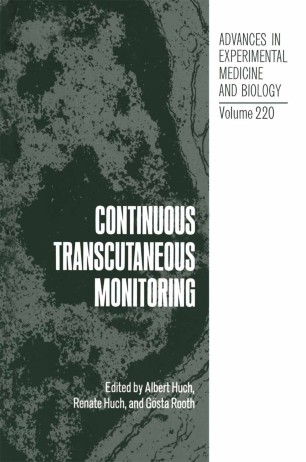 Part of the Advances in Experimental Medicine and Biology book series (ABBI, volume 7)

The i nterna ti ona 1 symposi a on transcutaneous monitori ng have dea It with the interaction between ideas and research, the introduction of unconventional techniques into clinical practice, and the joint efforts of researchers, clinicians, and industry to design and manufacture prac­ tical equipment for noninvasive monitoring. The First International Symposium on Continuous Transcutaneous Blood Gas Monitoring took place in Marburg, West Germany, from May 31 to June 2, 1978. This was the first major international meeting exclusively devoted to transcutaneous blood gas monitoring, and it was attended by the scientists who had developed this technique or had been \'Jorking with it, by a large number of doctors, mainly neonatologists who had just begun to use the technique or hoped to do so, and, finally, a rather large number of representatives of industry. The second symposium, with the same title, was held in Zurich, Switzerland, October 14-16, 1981. This time the focus was, to a large extent, on transcutaneous PC0 monitori ng, for whi ch equipment had become 2 commercially available only a short time before. Fetal monitoring was also discussed at length, as was the use of the transcutaneous techniques in other fields, such as vascular surgery and experimental animal research. The third symposium, October 1-4, 1986, was again held in Zurich. It \'Jas entitled "Continuous Transcutaneous Monitoring," indicating that not only blood gases but also other parameters could be monitored trans­ cutaneous ly.