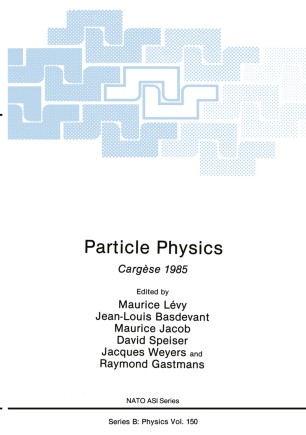 The 1981 Cargese Summer Institute on Fundamental Interactions was organized by the Universite Pierre et Marie Curie, Paris (M. LEVY and J-L. BASDEVANT), CERN (M. JACOB), the Universite Catholique de Louvain (D. SPEISER and J. WEYERS), and the Kotholieke Universiteit te Leuven (R. GASTMANS), which, since 1975 have joined their efforts and worked in common. It was the 24th Summer Institute held at Cargese and the 8th one organized by the two institutes of theoretical physics at Leuven and Louvain-Ia-Neuve. The 1985 school was centered around two main themes : the standard model of the fundamental interactions (and beyond) and astrophysics. The remarkable advances in the theoretical understanding and experimental confirmation of the standard model were reviewed in several lectures where the reader will find a thorough analysis of recent experiments as well as a detailed comparaison of the standard model with experiment. On a more theoretical side, supersymmetry, supergravity and strings were discussed as well. The second theme concerns astrophysics where the school was quite successful in bridging the gap between this fascinating subject and more conventional particle physics. We owe many thanks to all those who have made this Summer Institute possible ! Thanks are due to the Scientific Committee of NATO and its President and to the "Region Corse" for a generous grant. .. We wish to thank Miss M-F. HANSELER, Mrs ALRIFRAI, Mr and Mrs ARIANO, and Mr BERNIA and all others from Paris, Leuven, Louvain-la-Neuve and especially Cargese for their collaboration.