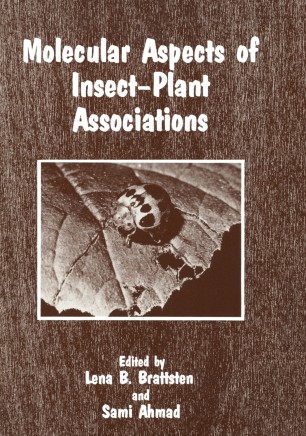 Thanks to the meticulous and enthusiastic work of insect collectors and taxonomists over the past hundred years and more, we have today a large amount of information on the feeding habits and life styles of sev­ eral hundred thousands of insect species. Insects that feed on plants during at least one of their life stages constitute about half of the three-quarters of a million described species. Their numbers both in terms of species and individuals together with their small but macroscopic sizes makes the insect-plant biological interface perhaps the most conspicuous, diverse and largest assemblage of intimate interspecies interactions in existence. It is also perhaps the most important biological interface be­ cause of the plants' role as primary producers upon which all other forms of earthly life depend, thereby bringing herbivorous insects occasionally into direct competition with human food and fiber production. Early enthusiasm revealed many remarkable specializations and associ­ ations between insects and plants, and occasionally assigned chemical me­ diators for them. However, the modern practices of large scale crop pro­ tection by synthetic pesticides and their attendant problems, particularly with resistance in "pests" and destruction of natural enemies, have been in large measure responsible for drawing our attention to the mechanisms whereby plants control insect populations and insects adapt to the plants' defenses. These practices have also brought home the importance of chemical mediators in practically all aspects of insect activities and, in parti­ cular, the importance of plant allelochemicals in maintaining and balan­ cing insect-plant associations.