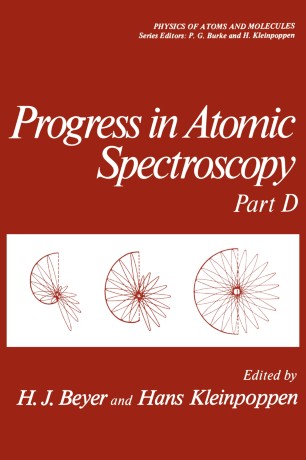 H. J. BEYER AND H. KLEINPOPPEN We are pleased to present Part D of Progress in Atomic Spectroscopy to the scientific community active in this field of research. When we invited authors to contribute articles to Part C to be dedicated to Wilhelm Hanle, we received a sufficiently enthusiastic response that we could embark on two further volumes and thus approach the initial goal (set when Parts A and B were in the planning stage) of an almost comprehensive survey of the current state of atomic spectroscopy. As mentioned in the introduction to Parts A and B, new experimental methods have enriched and advanced the field of atomic spectroscopy to such a degree that it serves not only as a source of atomic structure data but also as a test ground for fundamental atomic theories based upon the framework of quantum mechanics and quantum electrodynamics. However, modern laser and photon correlation techniques have also been applied successfully to probe beyond the "traditional" quantum mechanical and quantum electrodynamical theories into nuclear structure theories, electro­ weak theories, and the growing field of local realistic theories versus quan­ tum theories. It is obvious from the contents of this volume and by no means surprising that applications of laser radiation again played a decisive role in the development of new and high-precision spectroscopic techniques.