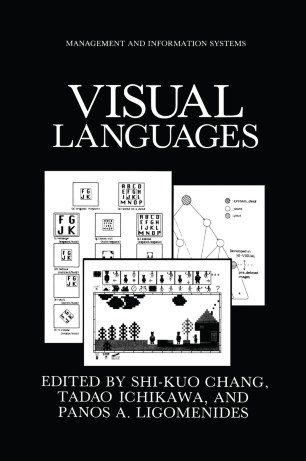 Part of the Management and Information Systems book series (LISS)

This book is intended as both an introduction to the state-of-the-art in visual languages, as well as an exposition of the frontiers of research in advanced visual languages. It is for computer scientists, computer engi­ neers, information scientists, application programmers, and technical managers responsible for software development projects who are inter­ ested in the methodology and manifold applications of visual languages and visual programming. The contents of this book are drawn from invited papers, as well as selected papers from two workshops: the 1985 IEEE Workshop on Lan­ guages for Automation-Cognitive Aspects in Information Processing, which was held in Mallorca, Spain, June 28-30, 1985; and the 1984 IEEE Workshop on Visual Languages, which was held in Hiroshima, Japan, December 7-9, 1984. Panos Ligomenides and I organized the technical program of LFA '85, and Tadao Ichikawa and I organized the techni­ cal program of VL '84. Both workshops have now become successful annual events in their own right. The intersecting area of visual languages and visual programming especially has become a fascinating new research area. It is hoped that this book will focus the reader's attention on some of the interesting research issues as well as the potential for future applications. After reading this book, the reader will undoubtedly get an impression that visual languages and the concept of generalized icons can be studied fruitfully from many different perspectives, including computer graphics, formal language theory, educational methodology, cognitive psychology and visual design.