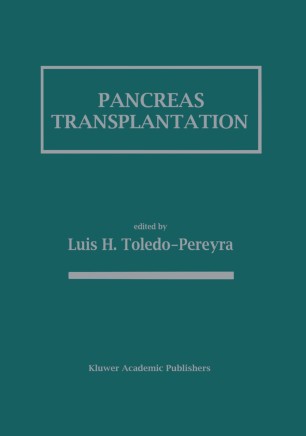 In December, 1966, two patients dying of months after the transplants had been per­ uremia as a result of diabetic kidney disease formed. This was long enough, however, to were offered a small chance of survival. Ac­ establish unequivocally in both patients cording to the thinking of the time, it was that an endocrine organ, the pancreas, could inappropriate-and perhaps even unethical­ function normally and for many days as a to offer them either chronic hemodialysis or human-to-human graft. The patients had kidney transplantation. These were considered become normoglycemic independent of insulin a waste of effort because it was believed that injections. scarce medical resources should not be spent The possible long-term benefits of restoring on patients, uremic or not, whose chances of insulin function were hotly argued then, and surviving for more than a few months were they have not been fully determined 20 years thought to be very small. Reduced to its later. It seems to me now, however, that the essence, the idea was that diabetic patients basic premise is sounder than I realized in were terrible risks and would remain so even if 1966: if one could restore an effective, norm­ the uremia were corrected.