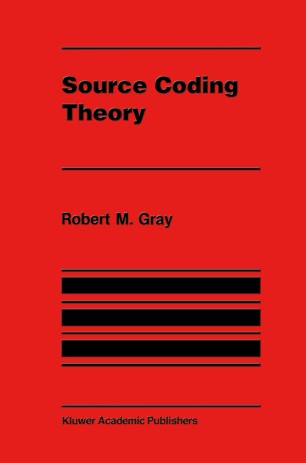 Part of the The Kluwer International Series in Engineering and Computer Science book series (SECS, volume 83)

Source coding theory has as its goal the characterization of the optimal performance achievable in idealized communication systems which must code an information source for transmission over a digital communication or storage channel for transmission to a user. The user must decode the information into a form that is a good approximation to the original. A code is optimal within some class if it achieves the best possible fidelity given whatever constraints are imposed on the code by the available channel. In theory, the primary constraint imposed on a code by the channel is its rate or resolution, the number of bits per second or per input symbol that it can transmit from sender to receiver. In the real world, complexity may be as important as rate. The origins and the basic form of much of the theory date from Shan­ non's classical development of noiseless source coding and source coding subject to a fidelity criterion (also called rate-distortion theory) [73] [74]. Shannon combined a probabilistic notion of information with limit theo­ rems from ergodic theory and a random coding technique to describe the optimal performance of systems with a constrained rate but with uncon­ strained complexity and delay. An alternative approach called asymptotic or high rate quantization theory based on different techniques and approx­ imations was introduced by Bennett at approximately the same time [4]. This approach constrained the delay but allowed the rate to grow large.