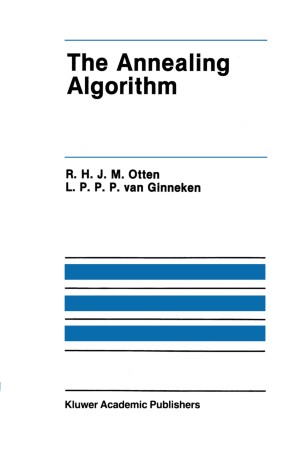 Part of the The Kluwer International Series in Engineering and Computer Science book series (SECS, volume 72)

The goal of the research out of which this monograph grew, was to make annealing as much as possible a general purpose optimization routine. At first glance this may seem a straight-forward task, for the formulation of its concept suggests applicability to any combinatorial optimization problem. All that is needed to run annealing on such a problem is a unique representation for each configuration, a procedure for measuring its quality, and a neighbor relation. Much more is needed however for obtaining acceptable results consistently in a reasonably short time. It is even doubtful whether the problem can be formulated such that annealing becomes an adequate approach for all instances of an optimization problem. Questions such as what is the best formulation for a given instance, and how should the process be controlled, have to be answered. Although much progress has been made in the years after the introduction of the concept into the field of combinatorial optimization in 1981, some important questions still do not have a definitive answer. In this book the reader will find the foundations of annealing in a self-contained and consistent presentation. Although the physical analogue from which the con­ cept emanated is mentioned in the first chapter, all theory is developed within the framework of markov chains. To achieve a high degree of instance independence adaptive strategies are introduced.