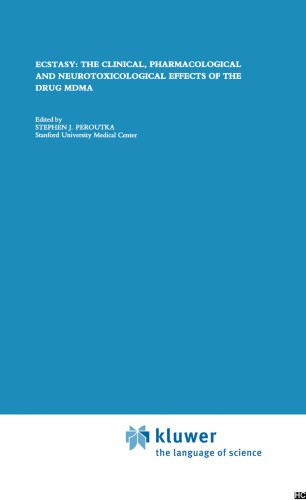 Ecstasy: The Clinical, Pharmacological and Neurotoxicological Effects of the Drug MDMA

Part of the Topics in the Neurosciences book series (TNSC, volume 9)

The variety of viewpoints expressed in this book illustrate the many contro­ versies surrounding MDMA [1]. On the one hand, the proponents ofMDMA use believe this agent offers a unique psychoactive effect that may have important clinical applications, especially in the field of psychotherapy. On the other hand, the scientific data concerning the neurotoxic effects of the drug are unequivocal. The most striking feature of the human information of MDMA is the paucity of data that has been generated on the drug since it was patented in 1914. As pointed out by Beck (Chapter 6) and others, a clear need exists for better epidemiological and clinical data on MDMA. In the absence of such data, arguments both for and against the cotinued use ofMDMA with humans will be difficult to support. Unfortunately, the currently available data must be used to develop rational policies for potential human users of MDMA. At the present time, there are no data indicating that recreational doses of MDMA permanently damage the human brain. Nonetheless, based on a review of the contents of this book as well as on informal discussions with approximately 200 recreational users of MDMA, the following personal observations suggest that MDMA is radically different from other recreational drugs.