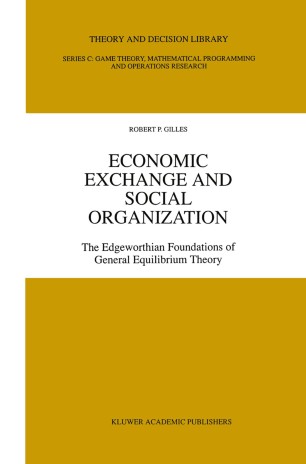 This book aims to develop an institutional approach to general economic equi­ librium. Thus far, institutional economics has essentially been confined to purely verbal discourse. Here I argue the case that general equilibrium theory forms a well rounded basis for the development of an institutional economic the­ ory. The fundamental economic trade mechanism underlying this refocusing is that of the Edgeworthian barter mechanism modelled through the equilibrium notion of the core of an economy. There is an extensive literature that links the core with the Walrasian price mechanism, which is explored in this book. Next I develop an alternative model of explicitly nonsovereign trade in the setting of an institutionally structured economy. In this book the core and several of its extensions are considered to be descriptions of the equilibrium allocations resulting from institutionalized barter processes, thereby providing a basis of an institutionally based economic theory. Traditionally finite economies have been assessed as the most natural represen­ tations of real life economies, in particular of market economies. Many funda­ mental insights have been developed. In the first half of the book I summarize the most influential and important results in the literature on finite economies regarding the relationship of the Walrasian model of a perfectly competitive market system and the Edgeworthian theory of individually based, pure barter processes. I use the axiomatic method as the main methodological framework according to which I construct my models.