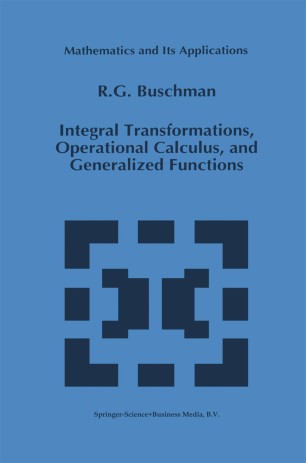 Part of the Mathematics and Its Applications book series (MAIA, volume 377)

It is not the object of the author to present comprehensive cov­ erage of any particular integral transformation or of any particular development of generalized functions, for there are books available in which this is done. Rather, this consists more of an introductory survey in which various ideas are explored. The Laplace transforma­ tion is taken as the model type of an integral transformation and a number of its properties are developed; later, the Fourier transfor­ mation is introduced. The operational calculus of Mikusinski is pre­ sented as a method of introducing generalized functions associated with the Laplace transformation. The construction is analogous to the construction of the rational numbers from the integers. Further on, generalized functions associated with the problem of extension of the Fourier transformation are introduced. This construction is anal­ ogous to the construction of the reals from the rationals by means of Cauchy sequences. A chapter with sections on a variety of trans­ formations is adjoined. Necessary levels of sophistication start low in the first chapter, but they grow considerably in some sections of later chapters. Background needs are stated at the beginnings of each chapter. Many theorems are given without proofs, which seems appro­ priate for the goals in mind. A selection of references is included. Without showing many of the details of rigor it is hoped that a strong indication is given that a firm mathematical foundation does actu­ ally exist for such entities as the "Dirac delta-function".